I am using a L96-M33 module with internal antenna on a project with a few hundred pieces manufatured in last few years.
In time I figured out that some pieces (cca 5%) has a very poor reception (receiving only 1-3 satellites with under open sky, no fix after 30+ minutes), whether other ones works flawlessly.

I followed all the electrical and mechanical recommendations in “Quectel_L96_Hardware_Design_V1.3.pdf”, after all the first few flawless batches are proof enough that the layout and SW is up to spec.

Lately with the last batch (manufatured Q1/Q2 2022) there are mostly the problematic modules having a very poor performance.

Are there any known marks of a batch with poor performance or a way to fix it (eg. integrated antenna replacement) ?

Dear Sir,
Could you provide photo of your L96-M33 modules? Good and NG modules with clear laser, then we can know if they’re delivered in the same batch.
As per your description, there should be something wrong with you RF part. Could you contact Quectel local FAE and provide us some samples for failure analysis.
Regards

Hello,
please see the few photos straight from AOI, the two latter ones should be definitely the ones with poor sensitivity. The first one “PN L96-M33” is from a previous batch, where we had some suspicion about sensitiviy as well.
Scanned few more with a QR reader on the phone, they were MP821BR12000205, MP821BR12000304, MP821KO05002793.
I have contacted our distributor (as well as Quectel Technical Support) about contact for a local FAE in Europe, waiting for answer.

Thanks for a quick response ! 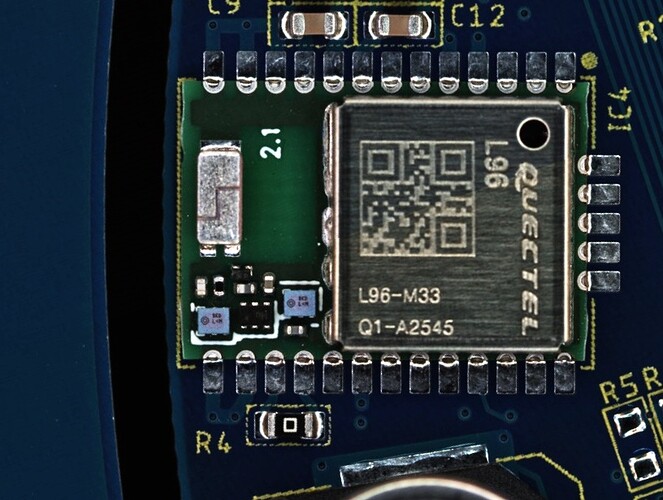 Dear Sir,
Those 3 modules are from 3 different batches.
Regards

Those 3 modules are from 3 different batches.

Thanks, well after triple checking the Gerbers and some invasive PCB tests I found a stray ground path near the edge of the board (and the keep-out area…), removing the path solved the whole situation