I’ve recently purchased some EP06-E modules, I’ve configured them successfully to work in some Mikrotik routers but I’m having issues getting them to work on Windows 10.

And in all cases the COM ports come up but the “Network Adapter” component is flapping, if I watch Device Manager it flickers frequently indicating hardware changes, and if I watch Network Connections I can see the Quectel device appearing and disappearing.

Interrogating the device over the AT COM port shows that it’s all functioning as expected, I’m registered on the network and I have an IP address and so on.

I’m sure this is a driver issue as during my testing uninstalling and reinstalling the various drivers at some point the device got picked up by a Microsoft provided driver labeled EP06-E (I assume it’s whatever driver they use on the MS specific versions of the modules, no idea how I got that to work, must’ve been a glitch or something as I presume the VID/PID of the MS versions is different) and started working as expected, unfortunately as soon as I rebooted the driver disappeared

Can you please provide a link to the latest Windows 10 compatible drivers for the EP06-E.

I’ve just managed to get the EP06-E driver up again, it’s not a Microsoft specific driver after all, it’s using the generic USB class driver and working fine; 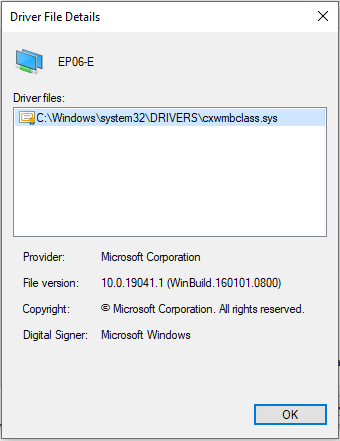 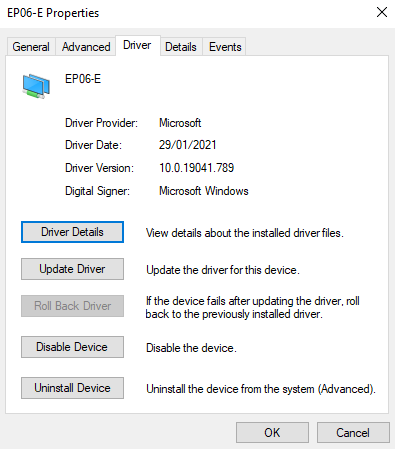 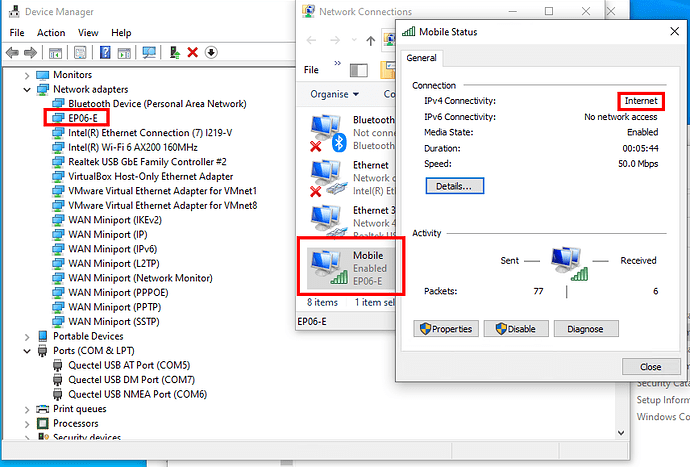 I got there by manually uninstalling the Quectel Wireless Network Adapter in Device Manager and checking the “Delete driver files for this device” box, it’s strange that the class driver didn’t pick it up straight away though, I might have to try plugging into a completely fresh machine and see whether I just didn’t notice that happening before installing the drivers.

EDIT: apparently it did, I just didn’t notice, I assumed the four EP06-E devices which didn’t have drivers were the three COM ports and the network adapter but apparently the fourth was actually the “USB Modem” component. So it would seem the “quick” solution here is to install everything EXCEPT the qcwwan.inf driver (or install all of them but then remove and delete that one after the fact)

Regardless, I would still appreciate a link to the current version of the “proper” drivers.