I wanted to purchase an EM160R card which is a 4x4 MIMO modem. But currently I still only have a 2x2 antenna which I may upgrade later.

I have the following questions: 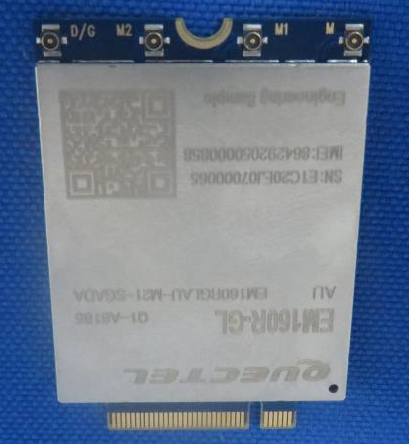 Q2: Is it a problem if I only use the modem in 2x2 MIMO mode? Does the modem detects automatically that 2 outputs aren’t connected to any antenna and won’t use those accordingly?

Q3: Is there an AT command allowing to switch to 2x2 MIMO mode?

Q4: Are all frequencies available on all outputs or do they use different frequencies? In others words, will I be able to use the full spectrum of frequencies with a 2x2 MIMO antenna?
I’m asking this because the Netgear M1 (Snapdragon X16) used 2 antennas for low frequencies and the other 2 for high frequencies (don’t know if it was a hardware limitation or firmware optimization)

The MIMO can not configure on module side. Do you mean you just cwant to use 2 antennas for your design? I think it is depened on which band you used. Need to check case by case. Please contact with Local FAE for this professional questions. Thanks.

Actually I found the solution.

To switch back to 4x4 MIMO: