I am testing the Teltonika FMC130 which for Australia uses the EC21-AU modem.

I am testing with a Telstra SIM but the result are the same when other carrier SIMs are used.

My issue is that when the device loses 4G it scans for 2G (rather than 3G) and of course loses connectivity as in Australia there is no 2G service during which time the device is offline. In fact I never see the device attempt 3G at all - it tries 2G and essentially waits until it has 4G service again.

The question is - can the EC21-AU modem be configured to not scan the 2G bands - in others words can the device be forced to only look for 3G and 4G services?

Hello visiondrive, thanks for your question
If you only want to find 3G and 4G network standards, you can use AT+QCFG=“nwscanmodeex”,24 (this command is saved in NV and takes effect immediately) to realize scanning only 3G and 4G, thank you. 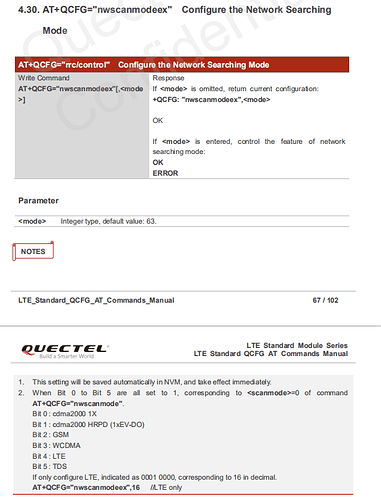 Many thanks for your feedback.

My issue now is that the device does not allow me to issue the AT commands (any AT command) via the interface provided by Teltonika meaning they must some how have it restricted to their control I am checking with them again.